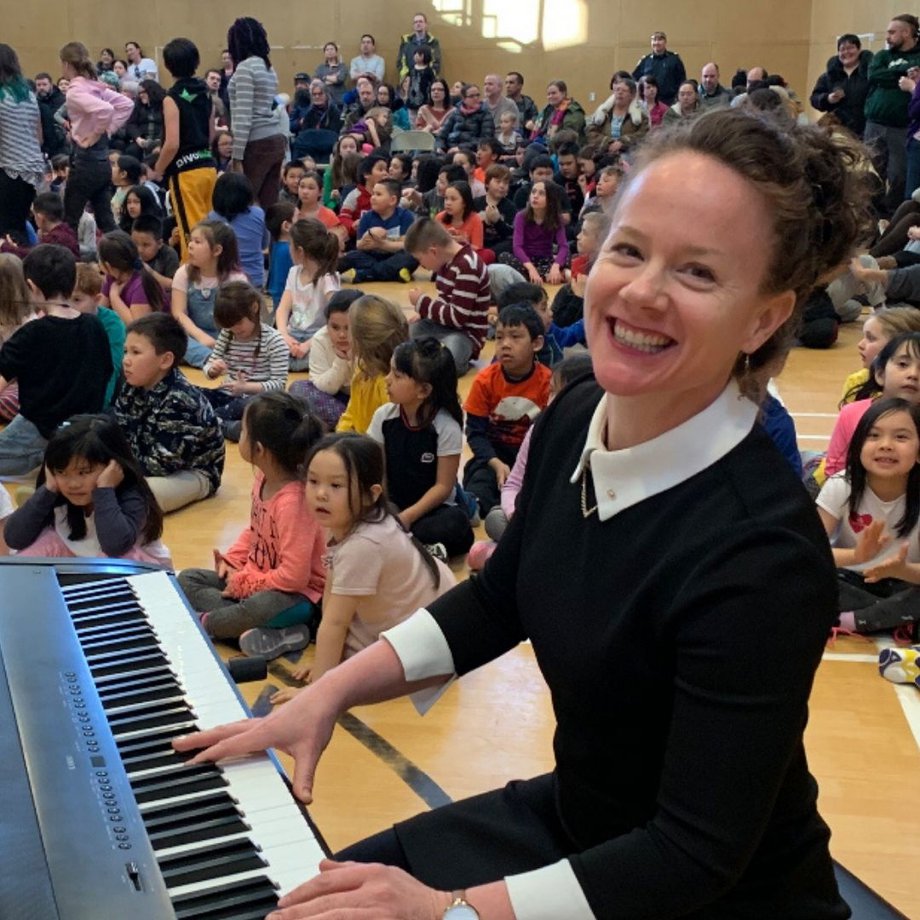 Mary Piercey-Lewis, a teacher at Inuksuk High School in Nunavut, is nominated for the 2021 MusiCounts Teacher of the Year Award, presented by the Canadian Scholarship Trust Foundation

“My teaching philosophy is one where artistry intersects with social activism: music education as social justice. In my classroom, music is used as a portal to Inuit culture, language, and identity.”

In the music classroom at Inuksuk High School in Iqaluit, Nunavut, connection is key. Through music, students connect to elders, the land, the Inuktitut language, Inuit culture, Inuit Qaujimajatuqangit (traditional Inuit knowledge), and each other.

Piercey-Lewis holds a PhD in ethnomusicology and published a text of Inuit choral music – the first of its kind. Piercey-Lewis’ commitment to the Inuit music community has spanned over two decades. The majority of students at Inuksuk High School is Inuit, and many of those students are third generation residential school survivors. By using music education as a portal to Inuit identity, community, and tradition, Piercey-Lewis is helping to foster confident, resilient, and proud young people.

“My teaching philosophy is one where artistry intersects with social activism: music education as social justice. In my classroom, music is used as a portal to Inuit culture, language, and identity.”

Performance figures largely in Piercy-Lewis’ teaching. Ensembles from Inuksuk High School have performed at Qaggiavuut Centre for the Performing Arts in Nunavut and the National Arts Centre in Ottawa, and have counted Prime Minister Justin Trudeau amongst their audiences.

“She expertly teaches quality music education using the music of Nunavut as the foundation,” says Heather Daley, Director of the Alianait Arts Festival. “In doing so, she meets the needs of her Inuit students and advocates the use of Inuktitut and Inuit culture in every aspect of her program. Mary is the only hired music teacher in the school system in Nunavut. All other music programs are offered outside of school- scheduled time by teachers who specialize in other subject areas; but have an interest in music [sic]. Mary continues to advocate for more full-time music specialists in the territory and helps those who run extra-curricular music programs by partnering with Inuktitut language specialists and tradition bearers to offer workshops on how teachers can use her collections in their programs.”

Mary Piercey-Lewis is one of five nominees for the MusiCounts Teacher of the Year Award, presented by the Canadian Scholarship Trust Foundation. The winner will be announced at the 50th JUNO Awards in June, and will receive a JUNO statuette, a $10,000 prize, and a sizable grant for the music program at their school.

The 2021 MusiCounts Teacher of the Year Award is Presented by

Back to 2021 MusiCounts Teacher of the Year Nominees